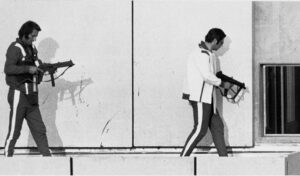 “Munich Massacre”
The 1972 Summer Olympics were held in Germany for the first time since the Nazis had hosted the Olympic Games in 1936. Because of this, tensions were high; however, the city of Munich was hopeful that the event would help their reputation as they planned to present a “new, democratic and optimistic Germany to the world.” They even created a motto for the Games, which was, Die Heiteren Spiele meaning the Happy Games. This optimism was soon shattered when terror struck just a few days into the Games. Many people were nervous about going to Munich for the Games; however, these nervous feelings were amplified for the athletes and trainers on the Israeli team who had lost family during the Holocaust.

The first few days of the Games went well, so the Israeli team decided to spend an evening watching The Fiddler on the Roof. After the play, they all returned to the Olympic Village to their two apartments to get some sleep. Around 4:30 AM on September 5, eight heavily armed members of the Palestinian terrorist organization Black September, jumped the fence of the Olympic Village and headed straight to the building that housed the Israeli team. They broke into the two Israeli apartments; several members of the team escaped as they jumped out of the windows, two men who fought back were killed, and the remaining nine were held hostage.

Just after 5:00 AM, police were alerted to the attack and news of the situation spread throughout the world. Palestinians had long felt ignored by the world and this attack directed the world’s attention to the Israeli- Palestinian crisis; however, many athletes throughout the Olympic Village were oblivious to the hostage situation and continued to participate in their events as if nothing was going on.

The Black September militants demanded that 234 Palestinian prisoners be released from Israeli prisons by 9:00 AM. Israel’s official policy was to refuse to negotiate with any terrorists as they believed it would encourage future acts of terrorism. The terrorists refused to back down; as the hours passed and as deadlines were not met, it was inevitable that the situation would not be resolved peacefully.

The terrorists requested two planes to take themselves and their hostages to Egypt, and the Germans agreed to cooperate with their demands. The plan was to transport the hostages and terrorists in helicopters from an airfield base outside of Munich, where they would then take a plane to Cairo. The Germans planned to have snipers and policemen ambush the terrorists once the helicopters had landed and rescue the hostages. The policemen; however, decided to abandon their positions, leaving only five snipers to take on the heavily-armed terrorists. Once the helicopters landed, the terrorists realized it was a trap and began firing. After an hour of gunfire, armored German cars arrived at the scene alerting the members of Black September that the end was near. The terrorists then shot four of the hostages on one of the helicopters, and threw a grenade inside as another killed the five hostages on the other helicopter – all nine Israeli hostages were killed.

The Olympic Games were briefly suspended during the hostage situation and on September 6, a memorial service was held. After the memorial service, the remaining Israeli Olympic team members withdrew from the competition and left the Games. The president of the Munich organizing committee wanted to cancel the remainder of the Olympic Games; however, the President of the International Olympic Committee said that the Games would not be cancelled due to the massacre.

Five of the terrorists were killed during the gun battle. The three surviving terrorists were taken into custody and held in a Munich prison; however, they would never face trial. On October 9, 1972 a Lufthansa flight was hijacked with the threat of being blown up if they were not released.

Despite Germany’s efforts to host a peaceful and positive Olympic Games, the 1972 Munich Summer Olympics will always be synonymous with the “Munich Massacre.”