“The Whack Heard Around the World”
It is hard to believe that it has been over 20 years since Tonya Harding became a notorious villain in the sports world. Harding still denies her involvement in the attack on fellow figure skater Nancy Kerrigan during the 1994 U.S. Figure Skating Championships – the competition that usually determines the figure skating Olympic team for the U.S. The Olympics should create a sense of team and unity; however, Tonya Harding seemed to only have winning, money, and endorsements on her mind.

Harding made a name for herself in the competitive skating world during the mid to late 1980s and in 1991 she reached the peak of her career. Harding became the first woman to ever complete a triple axel in competition; she stunned judges and earned the first 6.0 mark given to a female skater for technical merit. She won the 1991 U.S. National Figure Skating Championships and placed second in that year’s World Championships. Despite this success, she was never able to land the triple axel in competition and as a result, her career began to decline.

Harding remained in the spotlight as she was often compared to fellow American figure skater, Nancy Kerrigan. The two young women had a competitive rivalry on the ice, and the media created and fuelled another dimension to this rivalry. Nancy Kerrigan was often referred to as the “princess” of figure skating due to her poised and polished demeanor. Harding on the other hand, was a little rough around the edges, often criticized by judges for costumes she had made herself. Harding was athletic, but she did not project the sophisticated, clean-cut image that the figure skating world upheld. Kerrigan did, and as a result she received numerous endorsement deals leading up to the 1994 Winter Olympics in Lillehammer, Norway. 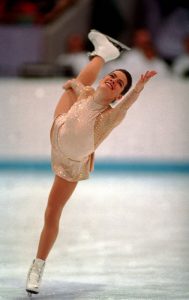 During the 1994 U.S. National Figure Skating Championships, the Kerrigan- Harding rivalry was amplified as both women were set to compete for their spots on the Olympic team; however, Nancy Kerrigan would never make it to the competition. After a practice session, Nancy Kerrigan was whacked on the knee with a metal baton by a mysterious man, injuring her so bad that she was unable to compete. Tonya Harding went on to win the competition, solidifying her spot on the Olympic team. Even though Kerrigan was unable to compete at the National Championships, it was later decided that if her knee healed, she would be given a spot on the team, as well.

Harding’s win was quickly overshadowed by accusations that she was linked to the conspiracy against Kerrigan. Both Kerrigan and Harding went on to compete at the 1994 Winter Olympics, but they were surrounded by media frenzy over the attack on Kerrigan. Harding’s ex-husband, Jeff Gillooly, along with three other men, was accused and found guilty of plotting and carrying out the attack on Kerrigan. He believed that if Kerrigan was out of the competition, money and endorsement deals would be in Harding’s future.

Throughout the Olympics, the media surrounded Harding, asking her if she knew about or was involved in the attack. Harding continued to deny any knowledge of or any involvement in the attack on Kerrigan. Nancy Kerrigan ended up winning the silver medal, losing the gold to Ukrainian Oksana Baiul; Tonya Harding placed a distant 8th.

Harding never admitted that she was involved in the plot; however, she did plead guilty to hindering prosecution because she learned of the plot after the attack. Harding received three years probation, paid $160,000 in fines, and completed 500 community service hours. The U.S. Figure Skating Association stripped her of her 1994 National Figure Skating Championship title, and forever banned her from U.S. figure skating. The USFSA believed that Harding knew about the attack before it happened and showed “a clear disregard for fairness, good sportsmanship and ethical behavior.”