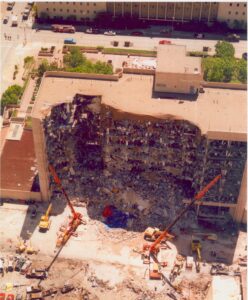 On April 19, 1995, in Oklahoma City, Oklahoma, everything seemed to be going as planned. That is, until 9:02 AM, when a Ryder truck parked in front of the Alfred P. Murrah Federal Building suddenly exploded, killing 168 people, including 19 children. The building was home to the regional offices important agencies like the DEA and ATF, along with the Secret Service.

The perpetrator was a man named Timothy McVeigh, along with a man named Terry Nichols. They were extremely right wing, former Army soldiers, and part of the Patriot Movement. They decided to commit an act of terrorism, and thus, the Oklahoma City Bombing occurred.

The FBI took this crime very seriously. They managed to identify the rented truck, which led them to the very same Timothy McVeigh. However, they were in for a surprise – McVeigh was already in jail. In an unrelated incident, McVeigh had been arrested on April 19 for driving a vehicle without a license plate and holding a concealed weapon. Shortly after the FBI found McVeigh, Nichols turned himself in.

Nichols was found guilty of conspiracy and involuntary manslaughter. His sentence was life in prison. McVeigh, however, was not so lucky, in 2001, he was executed after earlier being convicted of murder, conspiracy, and use of a weapon of mass destruction.