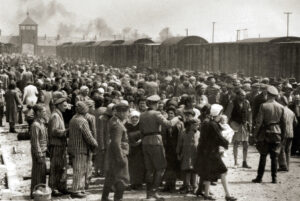 The Holocaust was the period from 1941 to 1945 during which 6 million Jews were killed because of anti-Semite Adolf Hitler, leader of the Nazi regime in Germany. Hitler chose to persecute this group in order to preserve what he perceived as racial purity for future generations, the concept of eugenics.

At first, Hitler used a combination of science and his own beliefs to justify his persecutions, putting legal restrictions on Jews. The infamous Nuremberg Laws of 1925 excluded Jews from society in Germany.

Jews tried to escape Hitler’s regime, but were unable. In 1938, the violence started as German Ernst vom Rath was killed by Hershel Grynszpan, a Jewish boy. Some Nazis believed this justified killing Jews, and during a night known as Kristallnacht, when these Nazis destroyed massive amounts of Jewish property, 30,000 Jews ended up in concentration camps.

Jews were sent to live in ghettos, and from there, were sent to death camps, where death was a highly likely outcome. One of the most infamous concentration camps was known as Auschwitz.

Later, Jews in concentration camps would be killed by various terrible methods: some starved or fell ill, other were shot, others were in slave labor until their death, and others were killed with gas. This was known as Nazi Germany’s “final solution” to the problem of Jews.

Upon arrival at the concentration camps, personal possessions and clothes were destroyed, and many were killed immediately; however, those younger were used for slave labor.

WWII would bring an end to this senseless killing. Between 1944 and 1945, the concentration camps were gradually released, and the Nazis defeated.

Author Primo Levi, a survivor of the Holocaust, wrote about life in a concentration camp: “We lay in a world of death and phantoms. The last trace of civilization had vanished around and inside us.”