The brutal and tragic Rwandan genocide began in this African nation in the year 1994. In Rwanda, there were three primary ethnic groups at the time: Hutu, Tutsi, and Twa. The Hutu group was the majority, and blamed the Tutsis for the economic, political, and social issues that the country was going through at the time. The political leaders of Rwanda only heightened and increased divisions between these two groups.

In 1994, the president of Rwanda, Habyarimana (a Hutu), was killed after the plane he was riding was shot down. To this day, there have been inconclusive investigations regarding who was responsible for shooting down the plane. Some claim it was a product of the Hutu extremists, while others blame the Rwandan Patriotic Front, or RPF. Immediately after this political assassination, Hutu extremists began exerting violence on the Tutsis, with plans to exterminate the entire Tutsi population. The most powerful political leaders were murdered, making room for the Hutus to set up an extremist military command.

The gravity of the violence in Rwanda was nauseating. Entire families were murdered systematically, and women were brutally raped and killed during the genocide. Radio stations called civilians to action, encouraging them to slaughter Tutsis and murder even their fellow neighbor. In just three months following President Habyarimana’s death, over 800,000 people perished in the Rwandan genocide. This includes thousands of Hutus that were opposed to the violent plans of the extremists, as well as an estimated three quarters of the Tutsi population. 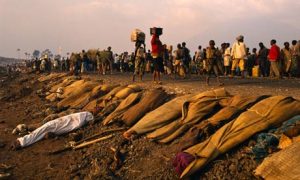 The Rwandan genocide came to an end when the Rwandan Patriotic Front (RPF)–a Tutsi-dominated group–defeated the Hutu regime. Over 2 million Hutus fled Rwanda after the victory of the RPF, who settled in refugee camps in surrounding African nations. The National Revolutionary Movement for Development (NRMD) party was outlawed, as it was the late President Habyarimana’s party which was responsible for organizing the genocide, and a new Constitution for Rwanda was created.

Although several nations (including France, Belgium, and the United States) were aware of the massive killing that was occurring in Rwanda, they did not intervene and take steps to prevent this horrific slaughter of innocent people. These foreign countries refused to acknowledge the ongoing genocide occurring in the country, regardless of the fact that they were fully informed about the Hutu plans for extermination. This issue regarding the lack of political intervention from other countries around the world during this time of vicious genocide is still a source of controversy today.

To read more about the Rwandan Genocide through the eyes of a survivor, check out the book, “Left to Tell,” by Immaculee Ilibagiza.