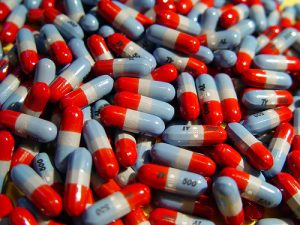 On September 29, 1982, 12-year-old Mary Kellerman of Chicago, Illinois, suddenly passed away after consuming an Extra-Strength Tylenol capsule. Later that day, in a neighboring Chicago suburb, a man named Adam Janus also mysteriously died after taking the same medication. Two members of his family, after also ingesting the Tylenol, soon died as well. Three more victims in the surrounding area suffered the same fate, and it did not take long for the link between the deaths and Tylenol to be discovered by the authorities. This strange string of deaths revealed that the Tylenol capsules had been laced with potassium cyanide.

The bottles that had been tampered with all came from different factories, yet the victims were all within the Chicago area. This meant that the tampering had not occurred at the production level, but rather within the stores themselves.

The manufacturer of Tylenol, Johnson & Johnson, immediately cut all production and advertisements of Tylenol, and advised the public not to take any medicine with acetaminophen in it. After the discovery that only capsules had been tampered with, the company offered to replace all purchased capsules. Due to this incident, stricter standards to prevent pharmaceutical tampering were soon implemented such as, tamper-resistant packaging and tampering with medications becoming a federal crime. Another big change was going from a capsule to a solid caplet in the shape of a capsule, as the capsules were found easier to tamper with without any noticeable signs of tampering. 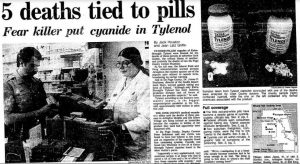 As the investigations began, Johnson & Johnson received several letters from James William Lewis claiming that he was the one who tampered with the capsules, and demanded $1 million to stop. Because he and his wife lived in New York at the time and had no ties to Chicago, police did not find much credible evidence to suggest that Lewis was actually the culprit. He was, however, arrested for extortion and served 13 years in prison (on top of additional multi-year sentences for unrelated crimes). Other suspects arose, but police were not able to tie any of them to the Tylenol murders.

After the 25th anniversary of the crime renewed public interest in the case, the police received several new tips and went back over the old evidence. In 2009 they conducted another search of Lewis’s home and later received a sample of Lewis’s DNA for analysis, but found nothing to incriminate him further. The FBI even requested DNA samples from the “Unabomber” Ted Kaczynski, who had terrorized the same area just a couple of years earlier, but he denied any involvement with the potassium cyanide case. Unfortunately, none of the new leads have panned out and the investigation continues.