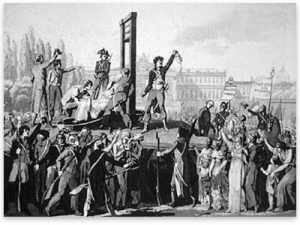 Capital punishment describes the execution of any individual who has been found guilty of certain major crimes. The term stems from the Latin word capitalis meaning “regarding the head,” and originally referred to a beheading. While beheadings for many years involved a sharp axe or sword, the guillotine, an arguably more humane method, replaced them in 1792.

Despite the term’s origin, capital punishment now describes any form of criminal execution. Some commonly used execution methods over the years include firing squads, hangings, gas chambers, the electric chair, and lethal injections. There have been many debates as to whether or not these methods are humane ways of ending a person’s life. While current execution methods are effective, each one has been subject to failure or has taken longer than expected.

By no means is the humanitarian view of capital punishment the only one challenging the public opinion. People all over the world have objected to it as an unfair form of punishment. Some do not believe that a human life should be taken for any reason, and that to do so is a form of murder. Others feel that the death penalty should be banned because it could mistakenly end the life of an innocent person. Over the years, several people on death row have been cleared of all charges and released from prison. A more economic argument claims that executions are too expensive, and that it costs less money to keep a criminal incarcerated than to put one to death. Some supporters of capital punishment argue that it is an excellent deterrent that will make potential criminals think twice before participating in violent acts. These individuals believe in the concept of “an eye for an eye,” and feel that every person who takes the life of another should lose their own. They also argue that the cost of a single execution is far less than the cost of keeping an inmate in prison for the duration of their life.

Many countries and states have banned the practice of capital punishment, while in other locations it is still common. One thing is certain – as long as the death penalty is an option, it will continue to be a highly controversial topic.