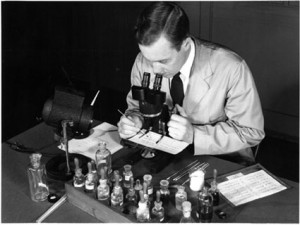 The definition of “forensic” is an argument or discussion used for a legal matter in a Court of Law. Therefore, forensic science is a dialogue about, or debate of, scientific theories in a judicial setting.

Although it is uncertain exactly where the concept of forensic science originated, most historical experts agree it was very likely in China around the 6th century or earlier. This belief is based on the earliest known mention of the concept, found in a book titled “Ming Yuen Shih Lu,” printed in that period.

During the 7th century, the concept of utilizing fingerprints as a means of identification was first established. According to historical records, a street merchant was able to verify the identity of a particular customer who owed him money by capturing his fingerprints on a bill. A judge accepted the prints as undeniable evidence, providing a very early example of forensic science in action. In 1659, the Merriam-Webster Dictionary officially recognized and printed the word “forensic”. The term had been used in medical writings for many years, but until then was not considered to be an “official” word in the English language. In modern times the term is well-known and part of everyday language.

Throughout the years, science became more prominent in legal settings, and scientific discoveries were commonly used to decide the outcome of important legal matters. By the late 1700s, forensic science was being used as a factor to determine guilt or innocence in major criminal cases, including charges of murder. One of this science’s primary functions is to study DNA, the genetic coding found on all living things. DNA samples can be acquired from any human or animal and then be tested, and compared to other samples for similarities. This process is highly respected, and a major consideration for cases in which the identity of an individual must be established.