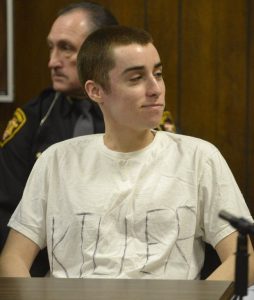 Thomas “TJ” Michael Lane III was born September 19, 1994 in Chardon, Ohio. As a teenager, unbeknownst to those around him, Lane had trouble socializing at school. At 7:30 AM, on February 27, 2012, he walked into Chardon High School and opened fire on a group of students. Lane killed three students and injured three more with a .22 caliber hand gun. Among the dead were Demetrius Hewlin, Russell King Jr., and Daniel Parmertor.

Joseph Ricci and Frank Hall are two teachers referred to as heroes for their acts of bravery. Ricci had just started his math class when he heard shooting, he ordered his students to “lockdown”, and when he heard moaning in the hallway he pulled the injured student into his classroom and applied first aid. Witnesses say Hall, assistant football coach, charged toward Lane, who was still armed, and chased him out of the school where he was later captured by police. Lane was arrested and charged with three counts of aggravated murder, two counts of attempted aggravated murder, and one count of felonious assault.

Lane was tried as an adult in court and pled guilty to all counts. During his sentencing hearing he began exhibiting public antics for attention. He smiled and laughed while listening to testimonies provided by the parents of those he had killed. When they were finished he cursed at all of them and gave them the middle finger, showing no remorse for his actions. Lane was convicted and sentenced to three life sentences without the chance of parole. He only avoided the death penalty because he was 17 at the time of the murders.

On September 11, 2014 Lane escaped from prison with fellow inmate Clifford Opperud. Both inmates were caught within 24 hours. Lane was found hiding in the woods surrounding the prison while Opperud was found a few hours later in a local neighborhood. Lane now resides in a super maximum penitentiary located in Youngstown, Ohio, where he will stay for the remainder of his life.