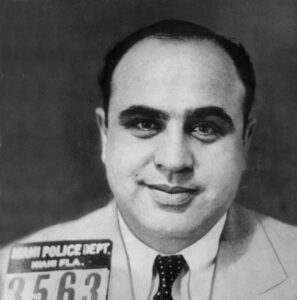 Al Capone was born in 1899 in Brooklyn, New York. After leaving school in sixth grade, he spent his time as a gang member in two gangs: the Brooklyn Rippers and the Forty Thieves Juniors. After working as a bouncer, he ended up working for a man named Johnny Torrio. When Torrio invited Capone to join him in Chicago in 1920, Capone accepted. Together, the two started working for Big Jim Colosimo’s gang, taking advantage of Prohibition by distributing illegal liquor.

Colosimo was assassinated, leaving the high-ranking Torrio in charge. However, this arrangement did not last long. In 1925, Torrio was the victim of another assassination attempt. Weakened by this, Torrio asked Capone to become the new boss. Capone, charismatic as he was, was liked among the men, who called him “The Big Fellow.”

With Capone’s help, they managed to expand their industry so far that Capone even ventured into legitimate investments, with a dye factory. He built a terrifying reputation for himself, and slowly but steadily, he and his gang eliminated their rivals.

On February 14, 1929, Al Capone’s gang was part of what is now known as the St. Valentine’s Day Massacre, which resulted in the deaths of seven men working for Capone’s rival, Bugs Moran.

On October 17, 1931, Capone received a sentence of 11 years for tax evasion. His sentence began in Atlanta, where he managed to manipulate those in power with a stash of cash. This behavior earned him a trip to Alcatraz, where he served more than four years. In 1939, he was released, and in 1947, he died from syphilis.