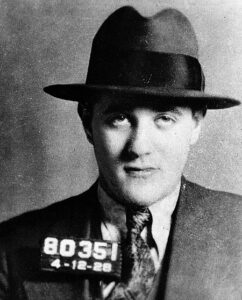 On February 28, 1906 Bugsy Siegelwas born in Brooklyn, New York. At the time of birth he was given the name Benjamin by his parents who were Jewish immigrants. Siegel was introduced to crime early in life. He grew up in a crime-ridden section of Williamsburg where there were Irish and Italian gangs. Siegel began the life of crime by extorting money from push peddlers on the Lower East Side of New York and by starting up the Bugs-Meyer Gang with Meyer Lansky whom he had met at the age of 12. The Bugs-Meyer Gang was a band of ruthless Jewish mobsters that ran a group of contract killers under the name Murder, Inc. It is believed that Siegel hid his friend Al Capone when there was a warrant out on Capone for murder.

In the 1920s Siegel was a prominent player in a fresh group of criminals. This is where Siegel gained the nickname Bugsy for his volatile nature. This group of criminals was organized by Charles “Lucky” Luciano and other Italian gangsters, and their goal was to kill off many of the veteran gangsters in New York. In 1931 Siegel along with four others were hired to execute Joe “the Boss” Masseria, a Sicilian mobster. The men carried out the execution on April 15 of that year and shot Masseria to death at Nuova Villa Tammaro in Coney Island. In 1937 Siegel moved to California and took his bootlegging and gambling rackets with him. While there he set up gambling dens and offshore gambling ships. Siegel also consolidated the pre-existing rackets of prostitution, narcotics and bookmaking. He lived and maintained an extravagant life style in Beverly Hills. Siegel had a palatial estate, rubbed elbows with Hollywood moguls and starlets and frequented Hollywood parties. On November 22, 1939, Siegel was one of the gang members who killed Harry “Big Greenie” Greenberg because Greenburg had threatened to become a police informant. Siegel’s partners in crime were Whitey Krakower and two unnamed gang members. Siegel was tried for the murder in September 1941, and Krakower was killed before he could face trial.

In 1945 Siegel moved to Los Vegas with Virginia Hill, an actress and a money runner for the Chicago Mob, who had a penchant for blackmailing Hollywood stars. He had been dating Hill since the late 1930s. With a reported $5 million in funding from the eastern crime syndicate Siegel began to put his plans of building a gambling mecca in the Nevada desert in action. The construction of the Flamingo Hotel and Casino soon surpassed its budget costing over $6 million. It was discovered that much of the overspending was caused by Siegel’s mismanagement of the funds. Siegel was convinced that he could draw thousands of vacationers, so he demanded the finest that money could buy. His previous partner in crime, Meyer Lansky, a prominent member of the eastern syndicate, was not by any means happy with Siegel’s betrayal.

In 1947 on the evening of June 20, a large number of rapidly fired bullets crashed through Siegel’s living room window at his home killing him brutally at the age of 42. Siegel died from bullet wounds to the head and lungs. Moments later three of Lansky’s cohorts entered the Flamingo Hotel and declared a takeover. Lansky denied involvement in Siegel’s death but it is thought beyond an unreasonable doubt that Siegel was murdered on syndicate orders.