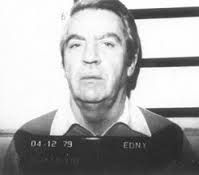 James “the Gent” Burke was born on July 5, 1931 in New York.  Burke was originally born as James Conway, an orphan who didn’t know his father and whose mother abandoned him when he was 2 years old.  Burke moved from one foster family to the next.  Throughout his many different homes he was treated kindly by some but also physically and sexually abused by others.

Burke began his life of crime at a young age and was behind bars for all but 86 days between the ages of 16 and 22.  When he was in prison, Burke murdered people for both the Lucchese Family and the Colombo Family.  He made many personal connections while in prison that helped him become a crime boss when he was finally released.

Burke began to love being a gangster.  He began to turn a profit through extortion, bribery, drug dealing, loan sharking, hijacking, and armed robbery.  In 1962 Burke’s fiancée was being stalked by her ex-boyfriend so Burke decided to murder him.  When police found his body, it was chopped into 12 separate pieces.  Burke routinely killed informants and witnesses by getting information from corrupt cops.

Soon both Henry Hill and James Burke were sent to prison for the beating of a Florida man who owed them money.  Both of them were released after six years and went right back into organized crime.  Hill, Burke, and a gang of Mafioso then pulled off the Lufthansa heist at the JFK International Airport.  Hill was soon arrested on drug trafficking charges and ratted on both Burke and the Mafioso.  His confession contained information that led to over 50 convictions.  In 1982 James Burke was sentenced to 20 years in prison for helping fix Boston College Basketball games.  In 1985, Burke also received an additional life sentence for the murder of Richard Eaton, who was believed to have stolen $250,000 in drug money. Burke later died of lung cancer on April 13, 1996.