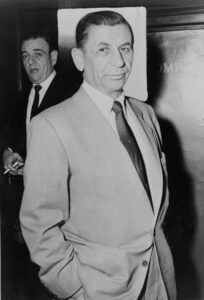 Maier Suchowljansky, otherwise known as Meyer Lansky, was born on July 4, 1902 in Grodno Russia. Meyer Lansky was a Polish Jew who immigrated with his parents to New York’s Lower East Side in 1911. His father became a garment presser and Meyer began schooling in Brooklyn, NY. While going to school he also began playing craps with boys from the area. This is where he met Benjamin “Bugsy” Siegel and Charles “Lucky” Luciano.

Meyer Lansky took a liking to Siegel and Luciano as soon as they met. By 1918 Lansky began running a floating craps game before graduating to auto theft and resale with Siegel.  By the 1920s Lansky and Siegel had formed a gang that began burglarizing, smuggling liquor, and much more. Lansky and Siegel began a murder squad which to this day is believed to be the prototype for Murder Inc. (headed by Louis Buchalter and Albert Anasthasia). In 1931 it is believed that Lansky persuaded Luciano and Anasthasia to murder Joe “The Boss” Masseria, and even sent Siegel to help commit the murder.

Between 1932 and 1934 Lansky joined Johnny Torrio, Lucky Luciano, and Albert Anasthasia in creating the National Crime Syndicate. Lansky was known as the “Mob’s Accountant” because he was an overseer and banker of the crime syndicate’s money. He used his knowledge of banking to launder money through foreign accounts.

By 1936 Meyer Lansky had established gambling operations in Florida, New Orleans, and Cuba. He also invested in many other profitable and legal businesses like hotels and golf courses. Lansky was a major investor in the Flamingo Hotel & Casino that Siegel created in Las Vegas, Nevada. Lansky became wary that Siegel was “fiddling with the books,” so he authorized his execution in 1947.

By the 1960s and 1970s Lansky was involved in drug smuggling, pornography, prostitution, and extortion. It was estimated at this time that his total holdings were worth $300 million. In 1970 Lansky received a tip that he was under investigation for tax evasion, so he fled to Israel. He was later arrested and brought back to the United States, but was acquitted on all charges. Law enforcement decided to abandon other charges due to Lansky’s poor health. Meyer Lansky died from lung cancer on May 15, 1983 in Miami Beach, Florida. It has been estimated that Lansky was worth over $400,000,000 at the time of his death.