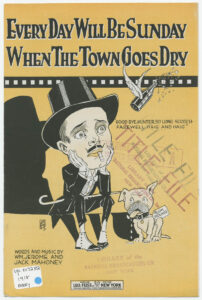 “Our country has deliberately undertaken a great social and economic experiment, noble in motive and far-reaching in purpose.”
–President Herbert Hoover on the 18th Amendment enacting Alcohol Prohibition, 1919

“The prestige of government has undoubtedly been lowered considerably by the prohibition law. For nothing is more destructive of respect for the government and the law of the land than passing laws which cannot be enforced. It is an open secret that the dangerous increase of crime in this country is closely connected with this.”
–Albert Einstein, 1921

The History of the Prohibition
Prohibition, the state of forbidding an act or instance, became a well known term in the late 1700s when the states began enforcing laws that prohibited the sale, distribution, and consumption of liquor. In 1846, Maine passed the first state prohibition law. By the time the Civil War began in 1861, other states had followed suit and adopted prohibition laws.

In 1917, Woodrow Wilson issued a temporary wartime prohibition, which allowed more grain to be used for food instead of liquor. That same year, Congress submitted the 18th amendment, banning the manufacture, sale and transportation of intoxicating liquors. With the support of the states, the law was ratified in 1919 and went into effect the following year. The National Prohibition Act was passed in 1919 and created the guidelines for enforcement of the prohibition. The enforcement was first carried out by the Internal Revenue Service (IRS) and then later transferred to the Justice Department. Enforcement proved to be tricky: smaller rural towns were easier to maintain, while larger urban areas were more of a challenge.

The Crimes
With the association of bootlegging, crime rates began to rise. Victimless crimes, such as drinking alcohol, began to increase criminal activity and created a source of income for gangs. People began turning to gangs for their source of liquor. As the gangs began selling liquor, they became richer. With this influx of money, the gangs also became more powerful. Famously, Al “Scarface” Capone profited off his bootlegging and speakeasies. The Chicago gangster is remembered for The Saint Valentine’s Day Massacre, where six of Capone’s men entered the headquarters of known rival George “Bugs” Moran, lined his men up against a wall and shot them. 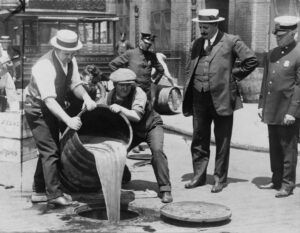 The Laws
The price of bootleg liquor hurt the poor and lower working class. Support for Prohibition began declining by the end of the 1920s. When the Great Depression began in 1932, the legalization of liquor manufacturing was seen as a popular way to increase jobs and revenue. Franklin D. Roosevelt believed in this and used it as the basis for his campaign. Winning over J. Edgar Hoover, Franklin Roosevelt brought an end to Prohibition. In 1933, Congress adopted the resolution by proposing the 21st Amendment to repeal the 18th Amendment. Later that same year, enough states provided the vote to ratify this new amendment. Although some states still continued to prohibit the sale of liquor, it was abandoned completely by 1966.