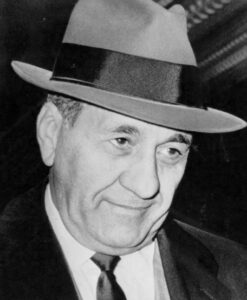 Anthony (Tony) Accardo was born on April 28, 1906 in Chicago, Illinois.  He was raised by an Italian immigrant shoemaker and his wife.  By 1920, when Tony was 14 it was clear that he showed no desire to succeed in class.  He quickly dropped out of school and became a flower delivery boy and a grocery clerk.  These are known to be his only two legal jobs.

Accardo was arrested multiple times for disorderly conduct in front of the local pool hall where Al Capone frequently visited.  Eventually his antics caught the eye of Capone, who reached out to Accardo and convinced him to work for the Chicago Crime Syndicate.  Accardo joined the Circus Café Gang and committed many violent crimes for the organization.  His friend Vincenzo DeMora from the Circus Gang then became a hitman in Capone’s crew.  When Capone was looking for new bodyguards, DeMora convinced him to promote Accardo.

Accardo was implicated in the Saint Valentine’s Day Massacre, in which he and six other men dressed up like police officers in order to kill rival gang members inside the SMC Cartage Company garage.  He was then ordered to savagely beat and murder former associates of Capone who had been traitors to the Outfit.  He was also implicated in many other murders associated with Capone.

Soon after Capone’s conviction in 1931, Accardo was given control of his own gang, and within the same year became No. 7 on the crime commission’s Public Enemy list.  He was an underboss for what remained of Capone’s crew under Paul Ricca.  Accardo helped the Outfit make millions while at the same time pushing the organization away from crimes that had previously gotten them into trouble.  Accardo allegedly took control of the Chicago mob when Ricca retired, but would deny it to his death.

The IRS probed into Accardo’s bank accounts and indicted him in 1960 for tax evasion.  He was sentenced to six years in prison and fined $15,000. The conviction was later overturned because of prejudicial media coverage that aired during the trial. He soon retired and was brought to the Senate multiple times for investigations into the mob. He invoked the Fifth Amendment guarantee more than 172 times and denied having any role in the Chicago mob. He admitted to having friendships with many of the mob’s leaders but he said “I have no control over anybody.” He died on May 27, 1992 from heart and lung disease.