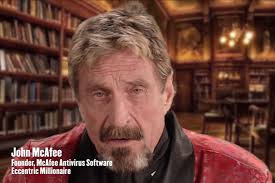 If you owned a PC during the past 20 years, you are likely familiar with McAfee antivirus software; however, you are likely unfamiliar with the man who pioneered it. John McAfee, a former employee of NASA and Lockheed Martin, founded McAfee Associates, a software company, in the late 1980s. He made his millions as PC ownership grew and fears of computer viruses increased.

In June of 2013, John McAfee released a video where he attacked the quality of McAfee software. To McAfee’s relief, in January 2014 Intel dropped the McAfee branding now marketing those products under Intel Security. Aside from a profanity-laced video attacking the product he pioneered, what happened to John McAfee since his departure from McAfee Associates in 1994?

Poor investment decisions and the market’s collapse in 2008 prompted John McAfee to sell his properties and assets. In an attempt to live a more rustic life, he then relocated to Belize to explore new business ventures and study yoga. In April 2012, after receiving information that McAfee’s home was a meth lab, Belize’s Gang Suppression Unit raided McAfee’s home. Despite the fact that McAfee spent many years under the influence of “bath salts”, which are potent psychosis-inducing drugs, they did not locate any illegal drugs. During the raid they killed McAfee’s dog, stole his passport and arrested him for possessing an unlicensed gun. McAfee believed that Belize was corrupt and that they raided his home because he had refused to financially support a local politician who lost in the election.

In November 2012, John McAfee was named a “person of interest” in the murder of his American neighbor, Gregory Faull. Neighbors reported that Faull and McAfee had gotten into an argument over McAfee’s “vicious” dogs. When Faull was found in his home fatally shot in the head and McAfee’s dogs were found dead, McAfee became a suspect.

Fearing that his life was in danger, McAfee fled to Guatemala to avoid further police questioning and seek political asylum. His asylum was denied and on December 5, 2012, he was arrested for entering the country illegally. One week later, he was deported back to the United States. As of January 2014, Belizean police have not pursued McAfee further for the crimes they had accused him of; however, they auctioned off his assets they seized from his compound before it was suspiciously burned down. Authorities in the U.S. have not questioned him since his return and have no plans to extradite him.

Despite the U.S. and Belize reporting that they are no longer pursuing him, McAfee is still on the move and fears for his life insisting that a drug cartel still has a hit out on him. McAfee, who lost everything after he fled Belize, started a new life in Portland in 2013; however, he relocated to Montreal after claiming he narrowly escaped an attempt on his life. In a 2012 interview Belize’s Prime Minister Dean Barrow said that McAfeee “seems to be extremely paranoid – I would go so far as to say bonkers.”

During his time in Canada, McAfee founded his new start-up company, Future Tense, based in Montreal. He is about to release the company’s first product, DCentral 1 – a program that determines which apps are tracking you.

A January 2014 article from CNN reported that McAfee and his wife were enjoying life in Canada, stating “McAfee’s adamant that he’s no longer on the run from police and that he is just trying to live in peace.” While a March 2014 article from USA Today recently reported that the couple is currently in Tennessee in the midst of crisscrossing the country to evade a team of assassins. USA Today quotes McAfee as saying “Running a company while on the run is not easy” and also reports that “McAfee and his bride are on to the next stop on their whirlwind tour of cheap hotels, tucked-away safe houses and backwoods roads.”