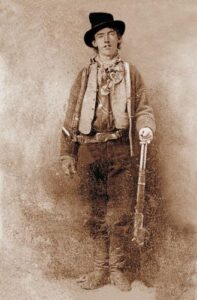 On the night of July 14, 1881, Sheriff Pat Garrett gunned down outlaw Billy the Kid in Fort Sumner. Garrett had recently caught the Kid, who was sentenced to hanging for killing another Sheriff, but Billy managed to escape. Garrett became involved again when he heard a tip that the Kid was hiding out in the Fort.

You can read all about Billy’s last night from the point of view of the man who shot him. A year after pulling the trigger, Pat Garrett wrote and published an account of what happened that night, and you can find that account here.

Billy the Kid was up for a posthumous pardon for the murder for which he was to be hanged. Bill Richardson, the governor of New Mexico, declined to follow through with that pardon.

Does Billy the Kid Deserve the Pardon He was Promised?
August 10th, 2010

For all of you Wild, Wild West aficionados out there, here is a post that is sure to be interesting!

Billy the Kid has long been one of the many names associated with the Wild West, alongside the Bob Dalton Gang, Butch Cassidy and the Sundance Kid, Cole Younger, Jesse James, and more.  What you may not know is that the long dead Kid may be up for a pardon from current New Mexico governor Bill Richardson.  So, why is the notorious Billy the Kid up for this pardon, you ask?  Well, let me explain by starting with a little history lesson.

Billy the Kid—born William Henry McCarty, but also known as William H. Bonney—originally came from New York.  While still young, his family relocated to New Mexico.  Unfortunately, by the time the Kid was fifteen years old his mother had passed away from tuberculosis.  It was at this point that many sources say the Kid began his life of crime—starting with stealing and progressing to murder.  Other sources state that without parental guidance, the Kid simply got a bad start in life.  He joined the wrong groups and wound up running from the law.  One particular misstep in the Kid’s life was his affiliation with the Lincoln County War. As a result of one of the many ambushes that occurred, Lincoln County Sheriff William Brady and one of his deputies were found dead, having been shot by the Kid.  Billy became a fugitive.

At some point after these murders, Lew Wallace became governor of New Mexico.  Now, the stories of what actually happened next seem to clash, so suffice it to say that the Kid ended up in custody.  He made a deal with the governor that should he testify against persons involved in the Lincoln County War, he would receive a full pardon for involvement in Sheriff Brady’s death and other misdeeds.  The Kid testified as promised, but the pardon was never granted.  So, the Kid escaped custody and eluded the law for the next two years.

During the Kid’s time as an outlaw, Pat Garrett was elected Sheriff and sent after him.  Once again, Billy the Kid ended up in custody.  This time however, he was sentenced to hang for the death of Sheriff Brady.  While in prison, the Kid escaped again—this time killing two guards in the process.  Once more, Sheriff Garrett was sent after the Kid.  The next time the Kid encountered the sheriff however, it would be his last.

On July 14, 1881, Sheriff Garrett, under the cover of shadows, shot Billy the Kid dead in a residence in Fort Sumner.  Some believe that the Kid lived on as “Brushy Bill” Roberts, but others believe that the Kid was in fact buried the next day in the Fort Sumner cemetery.  At some point, due to the debate, there had been a movement to have the supposed bodies of the Kid and his mother exhumed for DNA testing.  A judge apparently ruled against the efforts, but that hasn’t stopped present Governor Richardson’s interest in the case.  He continues to look into whether the Kid rightfully deserves a posthumous pardon as promised by Governor Wallace.  As you can imagine, there is much controversy arising from this investigation—which side will you join?  Click here to sign a petition for the pardon of Billy the Kid, or click here to sign a petition opposed to that pardon.

New Mexico governor, Bill Richardson, has mere hours left to decide whether or not to pardon “Billy the Kid” in the killing of a sheriff.  The case dates back to 1881…so why the New Year’s Eve deadline you may ask?  It’s the last day of Richardson’s term.

For those of you scratching your heads wondering who Billy the Kid is; he is the western outlaw also known as William Bonney.  He died by the gun of Sherriff Pat Garrett at age 21. Despite his young age, Kid was said to have killed anywhere between 9 and 21 men.  Richardson’s deputy chief of staff Eric Witt wants to clarify that they are not offering a general pardon for all of Kid’s crimes, but rather a pardon for the individual case of killing a sheriff.

Richardson is a known Billy the Kid aficionado, and is considering the pardon because of an alleged promise by Governor Lew Wallace.  He states, “Just think of all the good publicity New Mexico is receiving around the world on this…It’s fun”.  The defining issue revolves around the belief that Wallace promised this pardon in exchange for Kid’s knowledge in a murder case involving three men.  Those who oppose the pardon argue that there is no proof that Governor Wallace ever offered one; he may have simply tricked Kid in to offering up information.  Lew Wallace’s descendant William Wallace argues that pardoning Billy the Kid would, “declare Lew Wallace to have been a dishonorable liar”.

Some of those in favor of Kid’s pardon have filed a petition, including defense attorney Randi McGinn who has offered to handle the case for free.  She writes, “A promise is a promise and should be enforced”.  McGinn also says that Wallace assured Kid that he had the authority to exempt him from prosecution should he cooperate and share his knowledge, but that Wallace never held up his end of the deal.

Sheriff Pat Garrett’s grandson, J.P. Garrett, argues that Richardson should have assigned an impartial historian to aid in the case, and believes that McGinn’s involvement may be a conflict of interest.  Richardson appointed Charles Daniels to the state Supreme Court, whom McGinn is married to. William Wallace agrees, also citing that McGinn has, “meager qualifications”.  Despite these accusations, McGinn claims that her only link to the administration is that she offered to handle the case for free because of Richardson’s lifelong interest in Billy the Kid.

Richardson told the Associated Press on Wednesday, “I don’t know where I’ll end up. I might not pardon him. But then I might”.  I guess we’ll just all have to anxiously await the outcome of this deceased outlaw’s judicial fate.

Governor of New Mexico, Bill Richardson, declined to pardon Western outlaw Billy the Kid during his last hours in office. The pardon was on behalf of the killing of Sherriff William Brady in 1878. What prompted this last minute decision?  On ABC’s, “Good Morning America” Friday, Richardson explained that the evidence of the case simply did not warrant a pardon.  He stated that he decided against the pardon, “because of a lack of conclusiveness and the historical ambiguity as to why Gov. Wallace reneged on his promise.”