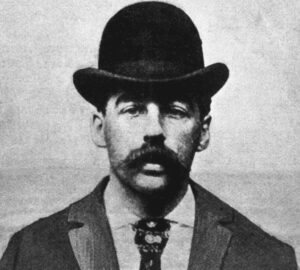 In 1861, Herman Webster Mudgett was born in New Hampshire. It is said that at an early age he was fascinated with skeletons and soon became obsessed with death. It may have been this interest that led him to pursue medicine. After graduating high school at 16, Mudgett changed his name to Henry Howard Holmes, and later in life would be known as H.H. Holmes. Holmes studied medicine at a small school in Vermont before being accepted into the University of Michigan Medical School. While enrolled in medical school, Holmes stole cadavers from the laboratory, burned or disfigured them, and then planted the bodies making it look as if they had been killed in an accident. The scandal behind it was that Holmes would take out insurance policies on these people before planting the bodies and would collect money once the bodies were discovered.

In 1884 Holmes passed his medical exams and in 1885 he moved to Chicago where he got a job working at a pharmacy under the alias Dr. Henry H. Holmes. When the owner of the drugstore passed away, he left his wife to take over the responsibilities of the store; however, Holmes convinced the widow to let him buy the store. The widow soon went missing and was never seen again. Holmes claimed that she moved to California, but this could never be verified.

After Holmes had become the owner of the drugstore, he purchased an empty lot across the street. He designed and built a 3-story hotel, which the neighborhood called the “Castle.” During its 1889 construction, Holmes hired and fired several construction crews so that no one would have a clear idea of what he was doing; he was designing a “Murder Castle.” After construction was complete in 1891, Holmes placed ads in newspapers offering jobs for young women and advertised the Castle as a place of lodging. He also placed ads presenting himself as a wealthy man looking for a wife.

All of Holmes’ employees, hotel guests, fiancés, and wives were required to have life insurance policies. Holmes paid the premiums as long as they listed him as the beneficiary. Most of his fiancés and wives would suddenly disappear, as did many of his employees and guests. People in the neighborhood eventually reported that they saw many women enter the Castle, but would never see them exit.

In 1893, Chicago was given the honor of hosting the World’s Fair, a cultural and social event to celebrate the 400th anniversary of Columbus’ discovery of America. The event was scheduled from May to October, and attracted millions of people from all over the world. When Holmes heard that the World’s Fair was coming to Chicago, he looked at it as an opportunity. He knew many visitors would be searching for lodging near the fair and believed many of them would be women whom he could easily seduce into staying at his hotel. After being lured into the hotel, many of these out-of-town visitors would never be seen again.

The first floor of the Castle had several stores; the two upper levels contained Holmes’ office and over 100 rooms that were used as living quarters. Some of these rooms were soundproof and contained gas lines so that Holmes could asphyxiate his guests whenever he felt like it. Throughout the building, there were trap doors, peepholes, stairways that led nowhere, and chutes that led into the basement. The basement was designed as Holmes’ own lab; it had a dissecting table, stretching rack, and crematory. Sometimes he would send the bodies down the chute, dissect them, strip them of the flesh and sell them as human skeleton models to medical schools. In other cases, he would choose to cremate or place the bodies into pits of acids.

Through it all, Holmes traveled throughout the U.S. committing insurance scams with his accomplice, Benjamin Pitezel. Once the World’s Fair had ended, Chicago’s economy was in a slump; therefore, Holmes abandoned the Castle and focused on insurance scams – committing random murders along the way. During this time, Holmes stole horses from Texas, shipped them to St. Louis, and sold them – making a fortune. He was arrested for this swindle and sent to jail.

While in jail, he concocted a new insurance scam with his cellmate, Marion Hedgepeth. Holmes said he would take out an insurance policy for $10,000, fake his own death, and then provide Hedgepeth with $500 in exchange for a lawyer who could help him if any problems arose. Once Holmes was released from jail on bail, he attempted his plan; however, the insurance company was suspicious and did not pay him. Holmes then decided to attempt a similar plan in Philadelphia. This time he would have Pitezel fake his own death; however, during this scam Holmes actually killed Pitezel and collected the money for himself.

In 1894, Marion Hedgepath, who was angry that he did not receive any money in the initial scam, told police about the scam Holmes had planned. The police tracked Holmes, finally catching up to him in Boston where they arrested him and held him on an outstanding warrant for the Texas horse swindle. At the time of his arrest, Holmes appeared as if he was prepared to flee the country and police became suspicious of him. Chicago police investigated Holmes’ Castle where they discovered his strange and efficient methods for committing tortuous murders. Many of the bodies they located were so badly dismembered and decomposed that it was hard for them to determine exactly how many bodies there really were.

The police investigation spread through Chicago, Indianapolis, and Toronto. While conducting their investigation in Toronto, police discovered the bodies of the Pitezel children, who had gone missing sometime during Holmes’ insurance fraud spree. Linking Holmes to their murders, police arrested him and he was convicted of their murders. He also confessed to 28 other murders; however, through investigations and missing person’s reports, it is believe that Holmes is responsible for up to 200 murders.

In May 1896, one of America’s first serial killers, H.H. Holmes, was hanged. The Castle was remodeled as an attraction and named the “Holmes Horror Castle”; however, it burned to the ground shortly before its opening.