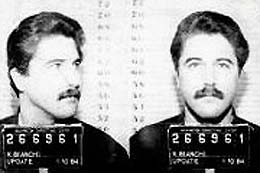 Between October 1977 and February 1978, ten young women between the ages of twelve and twenty-eight were raped, tortured, and killed in the hills of Los Angeles, California. The media dubbed the killer “The Hillside Strangler”. Cousins Angelo Buono, Jr. and Kenneth Bianchi committed the murders.

In 1976 Bianchi moved from Rochester, New York to Los Angeles to live with Buono. The pair quickly devolved to kidnapping and killing. Their obsession stemmed from the speculation that no one would truly miss young women if they suddenly disappeared. During their four-month spree the pair kidnapped women, brought them back to Buono’s home, then sexually assaulted and tortured them. After killing them (always by strangulation) Buono and Bianchi would wash the bodies of evidence and dispose them at various locations around LA, usually on hillsides.

The crimes in LA stopped when Bianchi moved to Washington State. While up north, Bianchi was unable to suppress his murderous urges and he killed two college students. The similarities in the Bellingham, WA cases and those of the Hillside strangler, coupled with witness statements connecting Bianchi to the two dead women led to his subsequent capture and arrest. During his interview, Bianchi claimed to have dissociative identity disorder. This was proved false by psychologists. Bianchi ultimately plead guilty to his crimes and revealed the name of his partner, Buono, in order to escape capital punishment. Both men were sentenced to life imprisonment for their crimes.

Buono died of a heart attack in prison in 2002, while Bianchi continues to serve his sentence in Washington State.