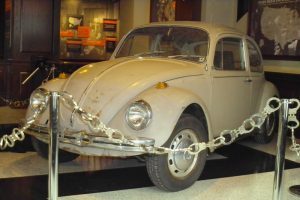 On August 15, 1975, Ted Bundy fled from a patrol car that was attempting to pull him over. When the police caught up to him and searched his tan 1968 Volkswagen Beetle, they found the following suspicious objects: a crowbar behind the driver’s seat, a box of large green plastic garbage bags, an ice pick, a flashlight, a pair of gloves, torn strips of sheeting, a knit ski mask, a pair of handcuffs, and a strange mask made from panty hose. They also noticed that the passenger seat had been removed and placed in the back seat. The police arrested Bundy for evading an officer, but without finding any concrete evidence tying him to an another crime, they later released him. Little did they know they had just set free one of the worst serial killers in American history.

Bundy’s documented killing spree began in January 1974 with the violent assault and rape of Joni Lenz, an 18-year-old freshman attending Bundy’s alma mater, the University of Washington. He continued to kidnap, assault, and murder young women throughout Washington, Utah, and Colorado for over a year without being caught, until he raised suspicion by fleeing from the patrol car that would lead to his first arrest.

Police rearrested Bundy on August 21, 1975, for the possession of burglary tools based on the items found in his car. A further police search found documents connecting Bundy to the locations of several missing women in Colorado and Utah, but again nothing substantial enough to hold him. Now on the authorities’ radar, Bundy thoroughly cleaned his Volkswagen and sold it to a teenager in Sandy, Utah the following month.

On October 2, three witnesses in Utah picked Bundy from a police lineup. He was charged with attempted murder and kidnapping with bail set at $100,000. Utah authorities seized the 1968 Volkswagen and examined it inch by inch, finding hairs that matched three potential victims. On March 1, 1976, the Utah authorities found him guilty of aggravated kidnapping and sentenced him to one to fifteen years in prison. Later, the Colorado Bureau of Investigation found new hairs behind the backseat area as well as blood under the door panel, leading to further charges filed against him in that state in October.

After an initial escape from prison in 1976, Bundy successfully escaped for the second time on December 30, 1977, and fled to Florida. There he resumed killing again for six more weeks, stealing money, credit cards, and cars to get by. On February 15th, 1978, while coincidentally driving a stolen Volkswagen Beetle, Bundy was pulled over by Officer David Lee in West Pensacola for traffic violations. Authorities convicted Bundy of murder in 1979 and sentenced him to death. He was executed on January 24, 1989 in Florida’s electric chair.

The Ted Bundy Volkswagen is currently on display at the Alcatraz East Crime Museum.