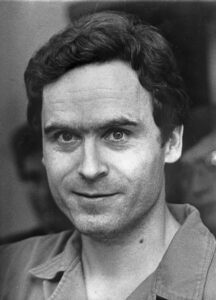 Ted Bundy was born on November 24, 1946 in Burlington, Vermont and grew up to be a charming, articulate, and intelligent young man. However, by the time he was a teenager living in Washington, Bundy already exhibited signs of the sadistic serial killer he would become.

In interviews he recalled being antisocial and wandering the streets looking for discarded pornography or open windows through which he could spy on unsuspecting women; he also had an extensive juvenile record for theft that was dismissed when he turned 18. By 1972 he had graduated college and showed great promise in a career in law or politics. That career would be cut short though when he discovered his true passion, viciously assaulting his earliest confirmed victim in 1974.

He tended to prey on young and attractive college women, first near his home in Washington, then moving east to Utah, Colorado, and finally in Florida. Bundy would prey on these women with a ruse, often wearing his arm in a sling or his leg in a fake cast and walking on crutches. He would then use his charm and faked disability to convince his victims to help him carry books or unload objects from his car. He was also known to impersonate authority figures, such as police officers and firefighters, to gain victims’ trust before he attacked. Once they got to his 1968 tan Volkswagen Beetle, he would strike them over the head with a crowbar or pipe. After hitting his victims, he would immobilize them with handcuffs and force them into the vehicle. Bundy had removed the passenger seat and often stored it in the backseat or trunk, leaving an empty space on the floor for his victim to lie out of sight as he drove away.

Bundy was able to rape and murder scores of women this way. He typically strangled or bludgeoned his victims as well as mutilating them after death. He then prolonged the events by returning to visit the corpses at their dump sites or even taking them home in order to gain further sexual gratification. In some cases, he even shockingly displayed their decapitated heads in his apartment and slept with their corpses until putrefaction made it unbearable.

As body counts rose and witness descriptions spread, several people contacted authorities to report Bundy as a potentially matching suspect. However, police consistently ruled him out based on his seemingly upstanding character and clean-cut appearance. He was able to avoid detection even longer by learning how to leave virtually no evidence that could be traced by the still rudimentary forensics techniques of the 1970s. Bundy was finally arrested for the first time on August 16, 1975, in Utah after fleeing from a patrol car. A search of the vehicle yielded masks, handcuffs, rope, and other nefarious items, but nothing definitively linking him to the crimes. He was released but remained under constant surveillance, until he was arrested again for the kidnapping and assault of one of his victims several months later. Bundy escaped custody a year later after being transferred from Utah to Colorado for another trial but was recaptured within a week. He then managed to escape a second time on December 30, 1977, at which point he was able to reach Florida and resume his killing spree. He raped or murdered at least six more victims, five of them Florida State University students, before he was apprehended again for a traffic violation on February 15, 1978. He was finally sentenced to death and died in the electric chair on January 24, 1989. At the time of his execution, Bundy had confessed to 30 murders, though the actual number of his victims remains unknown.

Ted Bundy’s Volkswagen is on display at the Alcatraz East Crime Museum in Tennessee.