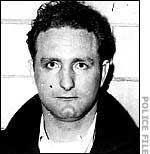 Howie Winter was born Howard Thomas Winter on Saint Patrick’s Day 1929 and is known for his role as the second leader of the Winter Hill Gang. The arrival of Irish immigrants into the United States was not welcomed. Discrimination against Irish immigrants continued and they became easy targets from other communities. Naturally, prejudice created support and alliance. The Irish immigrants began finding employment in the police department or in the mafia. The beginning of Prohibition, saw a rise of Irish gangsters.

Between 1965 and 1979, Winter’s leadership led to profitable fixed horse-racing schemes. Throughout his leadership in the Winter Hill Gang, the rivalry against the Charlestown Mob continued. With the numerous deaths between the two gangs, the Winter Hill Gang’s manpower ultimately ended the Irish Gang war. In 1979, Winter was indicted for racketeering activity along with several of his members. Anthony Ciulla, who was employed by Winter, received immunity to testify against Winter. He testified that he dealt directly with jockeys and trainers to fix the horse races. In the mean time, Winter financed the schemes, placed outside bets with illegal bookmakers, and collected and distributed the winnings to the runners. Ciulla described several fixed races – one which resulted in a profit of $140,000. He described one example of a fixed race when a group, including Winter, purchased a horse, had the horse lose several races (becoming eligible for handicap races), and profited with a fixed comeback. Winter’s defense consisted of character impeachment of the prime witness, Ciulla.

Winter was sentenced to 10 years for the horse-racing schemes and was released in 1987. After his release from prison, Winter was arrested for possession and intent to distribute cocaine. The FBI attempted to strike a deal with Winter to testify against James “Whitey” Bulger, a fellow mobster of their time and FBI informant, but Winter refused. Consequently, Winter was sentenced to prison. He was released after serving his time for narcotics trafficking, and is now living in Massachusetts.