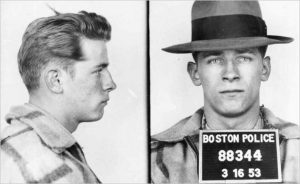 By the time of his arrest, notorious mobster James “Whitey” Bulger had a rap sheet that included nineteen counts of murder and a bevy of other charges that had landed him on the FBI’s Ten Most Wanted List.

Starting a life of crime from an early age, Bulger quickly became a primary player in Boston’s Winter Hill Gang. After a sweeping arrest of its highest leaders in 1979 left a power vacuum, Whitey assumed control. However, the reason he was able to escape arrest and take over was because he had been working with the FBI as an informant since 1974. Capitalizing on the rivalry between the local Irish mob and the Italian mafia, FBI Agent John Connelly recruited Bulger to pass on information that would lead to the downfall of his Italian enemies. In reality, this arrangement ultimately gave Bulger the ability to run his affairs with impunity and become even more powerful. Bulger and Connelly knew each other from childhood, so Connelly turned a blind eye to the deeds of Bulger’s gang and protected Bulger from FBI prosecution by claiming he was too valuable of an informant to lose. However, Bulger’s reputation for exceptional brutality grew over time until the case against him became too strong to ignore.

By 1994, the DEA had been building an independent case against Bulger for years to avoid FBI corruption. At Christmas of that year they finally had enough to issue arrest warrants for Bulger and several associates, but Connelly got wind of this and tipped Bulger off about the sting. Bulger and his longtime girlfriend Catherine Greig fled in January 1995 and remained under the radar for nearly two decades. Connelly was later incarcerated for his role in the gangster’s escape.

Ultimately, it was not through Bulger, but through his girlfriend, Catherine, that the FBI finally got its big break. Instead of focusing on Whitey, the FBI switched its tactics to disseminating information on her as a lover of dogs, plastic surgery, beauty salons, and dental hygiene. This led to a tip from a neighbor that resulted in their arrest in a Santa Monica apartment on June 22, 2011.

As of June 12, 2012, Catherine was indicted by a federal grand jury for conspiracy to harbor and conceal a fugitive from justice and sentenced to eight years in prison. She was then sentenced to an additional 21 months in April 2016 on further charges in the case against Bulger.

As for Whitey, he was brought to trial for various charges which included 33 individual acts of murder, extortion, and selling narcotics. He was found guilty of 22 of these acts and on November 14, 2013, at the age of 83, was sentenced to two consecutive life terms in federal prison.

James Bulger’s infiltration of the FBI, and the sheer length of time that he was able to evade federal authorities, embarrassed the Bureau. Since being taken into custody he has boasted about his corruption of six FBI agents and 20 Boston police officers, and many feared he would cause a scandal by implicating local, state, and federal personnel during the course of his trial. However he has always adamantly denied being a “rat” for law enforcement.

Whitey Bulger continues to carry out his sentence in a federal prison in Sumterville, Florida.