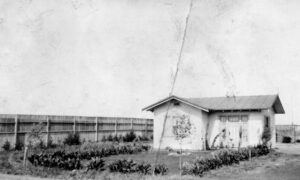 In 1928, southern California was booming. Agriculture and the movie industry had transformed this area into a lively metropolis. However, a string of child abductions and murders in the small town of Wineville changed the views of the city. A man named Gordon Stewart Northcott kidnapped, sexually abused, and murdered at least three, and possibly as many as twenty, young boys. It is believed that he had the help of his mother and his Canadian nephew to commit these crimes.

On March 10, 1928, Walter Collins disappeared. This nine-year-old boy was last seen around 5:00 PM by a neighbor at the corner of Pasadena Avenue and North Avenue 23 in Lincoln Heights, Los Angeles. His mother, Christine Collins, gave him some money to go see a movie at a nearby theatre. His father was in Folsom State Prison for robbery.

The Los Angeles Police Department was already under investigation for several corruption scandals and their inability to locate Walter Collins was rather embarrassing. The police chief, James Davis, was under a lot of pressure to solve the case. The police looked along Lincoln Park Lake but were unable to find anything. Collins’ father thought former prison inmates were responsible for his son’s disappearance in an attempt to get revenge. He worked at the prison’s cafeteria and was responsible for reporting other inmates’ infractions. With this sort of job, it is possible that he made more than a few enemies.

Several tips came in, but nothing turned out to be very useful. A gas station attendant in Glendale, Richard Strothers, reported seeing a dead boy wrapped in newspaper in the back of a car when a “foreign” couple stopped to ask for directions. A man named C.V. Staley followed the couple when they left the gas station. The couple stopped for a few moments in front of the police station and then sped out of town losing Staley. When the police showed Strothers and Staley Walter Collins’ photo, they both said he was the boy in the back of the car. Other tips came in about a couple traveling across the state with a boy who was begging them to let him go.

Walter’s disappearance wasn’t the only one around this time. Nelson and Lewis Winslow, ten and twelve-years-old, went missing on their way home to Pomona on May 16, 1928. Their parents received strange letters from them. The first said they were heading to Mexico and the second said they planned to stay missing as long as they can to become famous.

The police didn’t connect these two disappearances together at first. They also didn’t find a connection between these cases and the headless body of a Latino boy they found in La Puente in February. And with none of these connections made, a neighbor’s complaint about a man mistreating a boy at his poultry farm didn’t appear to be relevant either.

In August 1928, Illinois police picked up a boy who told them his name was Arthur Kent. At first he would say only that his father abandoned him, so they placed him with a temporary family. Eventually he told them his real name was Walter Collins from Los Angeles and that he had been avoiding their questions to protect his father. Illinois police contacted California police, sent photographs of the boy, and later sent him to Los Angeles. California authorities contacted Christine Collins and showed her the photos of “her son.” She immediately said that he was not her son. However, Captain J.J. Jones talked her into “trying out” the boy for awhile.

Three weeks after their reunion, Christine Collins brought the boy back to the police station. She brought with her Walter’s dental records and signed statements from people who knew Walter saying that this boy was not him. Captain Jones called her a lunatic and claimed she was trying to get the state to take care of her child and believed she was just trying to embarrass the police department. He threw her into a psychiatric ward in Los Angeles County General Hospital on a “Code 12” which allowed police to get rid of troublemakers by throwing them into psychiatric hospitals.

In September 1928, a Canadian woman named Winnefred Clark contacted U.S. authorities to tell them that her nephew had kidnapped and was holding her son, Sanford Wesley Clark, in California. Jessie Clark was worried about her 15 year-old brother since he left two years prior with their uncle, Gordon Stewart Northcott, who was only 21 at the time. Jessie decided to go to Northcott’s ranch in Wineville, California to check on things. In the few days she stayed, she found out her uncle was abusing her brother and was involved in something very strange. Her uncle even attacked her too.

On September 15, 1928, Sanford told investigators that his uncle kidnapped him and had physically and sexually abused him. He also said Northcott had forced him to watch the abuse and murders of Walter Collins, Nelson and Lewis Winslow, and other boys. Sometimes he even made him participate in these acts. Northcott abducted boys to rape them and when he got bored, he would lead them into the incubator room to see hatching chicks and kill them with an ax. To destroy the evidence, Northcott covered their bodies in quicklime.

Sanford also said Northcott had killed a Latino boy in La Puente. They both killed Walter Collins because the boy had seen Northcott help another man kill his mining partner. Sanford told the police that they could find graves near the chicken coop for the Winslow brothers and Walter Collins. Two graves were found but the full bodies were not there, only pieces of bone. Axes found among other farm equipment had human hair and blood on them. Several bones were scattered across the ranch, which pathologists later determined to be from male children. Inside the house, a book checked out to one of the Winslow boys was found. Also more letters to their parents were written. A child’s whistle and several Boy Scout badges were found. Nothing that could be directly attributed to Walter Collins was found.

Northcott’s father, Cyrus George Northcott, told police two days later that his son had admitted the murders to him. But by that time, Northcott and his mother, Louise Northcott, had left town. The Los Angeles Police Department initially continued to insist that Christine Collins had her son. They only discontinued this belief when a handwriting expert came in to analyze their writing styles. The expert concluded that this boy’s handwriting was definitely not a match to the samples collected from previous years. The strange “R’s” the boy used was commonly taught in Illinois but not found in California.

The boy eventually told the truth. He admitted several other aliases as well. He said he had decided to try to pass off as Walter Collins when someone had mentioned he looked like the missing boy. Arthur Hutchins, 12 years-old, had assumed Collins’ identity in an attempt to go to Hollywood to meet his cowboy hero, Tom Mix. His stepmother picked him up in Los Angeles and took him back to their Illinois home. He didn’t appear to have any remorse for his actions and said Christine Collins must have known he wasn’t her son so it was just a big game for them both. Shortly after Arthur Hutchins went home, Christine Collins was released from the institution.

On September 20, 1928, Gordon Stewart Northcott was arrested in British Columbia. They arrested his mother, Sarah Louise Northcott, in Alberta. In December, the police took Northcott back to his ranch in an attempt to get more information. While there, he verbally confessed to five murders, including the Winslow brothers, Walter Collins, and a Mexican boy named Alvin Gothea. However later that day, Northcott only admitted one homicide in a written confession and that was the murder on Alvin Gothea.

Also in December, Northcott’s mother confessed to the murder of Walter Collins. She said she delivered the final blow to the boy and then buried him in a hole near the chicken coop. Sanford Clark said his grandmother had told them that if they each hit the boy then they will be equally guilty if caught. Sarah Louise Northcott was sentenced to life in prison for the murder of Walter Collins.

Gordon Stewart Northcott’s trial began in January 1929. Northcott fired several defense attorneys and proceeded to defend himself. He admitted to abusing young boys because he loved them. He even had his mother testify for him. She claimed she was actually his grandmother because her husband had raped her daughter Winnefred and Northcott was Winnefred’s son. Northcott also claimed to have an incestuous relationship with Sarah Louise and that his father had molested him. Northcott’s defense was rather odd and it was obvious that he was no lawyer. Along with the strange defense, Sarah Louise didn’t prove to be a very credible witness since the only continuous statement she made was that she would do anything for Gordon.

On February 8, 1929, an all-male jury convicted Northcott for the first-degree murders of the Winslow brothers and an anonymous victim. Judge George R. Freeman sentenced him to death. Although he was convicted and sentenced to death, the families of his victims didn’t have closure due to the inability to find intact bodies. Northcott was hanged on October 2, 1930. Shortly after his execution, the Wineville Chicken Coop murders were finally put to rest after the citizens decided to change the town’s name. They changed it to Mira Loma, which means “view from the hill” in Spanish. This name change helped the town to disassociate from the horrific acts on that poultry farm.

The horrors of the Wineville Chicken Coop Murders were introduced again in 2008 when the Clint Eastwood film Changeling was released. The story reflects Christine Collins’ attempts to recover her son, Walter. The Changeling showed Christine Collins’ perseverance to overcome the unjust law enforcement system and to learn the truth about her son.