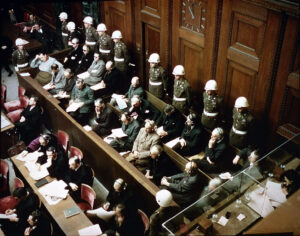 After Germany unconditionally surrendered in 1945, preparations began to bring those involved in the Holocaust and other war-time atrocities to justice. Many leading Nazi officials were brought before the International Military Tribunal in Nuremburg, Germany. The trials formally began on November 20, 1945. Defining crimes against humanity as “murder, extermination, enslavement, deportation…or persecutions on political, racial, or religious grounds,” the tribunal tried 24 defendants with crimes against humanity, war crimes, and crimes against peace, as well as conspiracy charges in order to make sure the laws used to further the Nazi agenda were not overlooked. However, not all the defendants appeared in court. One, Gustav Krupp, a German industrialist, was in failing health at the time of the proceedings and was excluded. Martin Bormann, a Nazi party secretary, was tried and convicted in absentia and Robert Lay committed suicide before the trial even began, leaving 21 defendants to be present during the trials. Several key party leaders, including Adolf Hitler, committed suicide before the war’s end and were not tried posthumously for fear of giving clout to conspiracy theorists.

Great Britain, the United States, the Soviet Union, and France all supplied a judge and prosecution team to the tribunal; each defendant was allowed his own legal team. The trials were translated into Russian, German, English, and French so each country, and spectators, could have a clear understanding of the proceedings. Many of the cases, including those argued by American chief prosecutor Robert Jackson, based their evidence on written records documented by the defendants, making it easier to show that the trial would not be relying on biased testimony. The documents from those trials are the best written record of the plan for “a Final Solution” and the amount of human life lost.

The Nuremburg trials were only the beginning of the world’s search for justice after the end of World War II. Most of the subsequent trials were of those in lower positions of the party and military, many of whom claimed no responsibility, saying they were just following orders. “It is not the task of a soldier to be the judge of his Commander in Chief. May history or the Almighty do that” said one officer who was later sentenced to death. Since the original Nuremburg trials many others have been tried for their part in the atrocities, but many others have never been found and have escaped their punishment.

Following the disbanding of the International Military tribunal, an International Criminal Court (ICC) was created to deal with future atrocities.