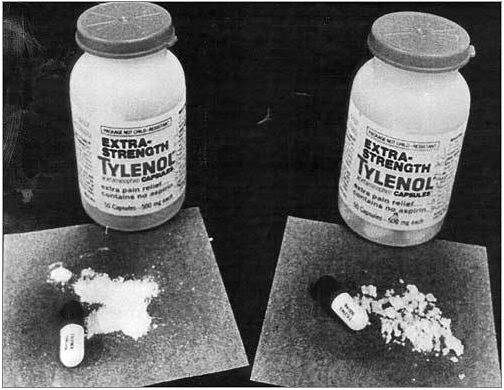 On the morning of September 29, 1982, 12-year-old Mary Kellerman of Elk Grove Village, IL went to her parent’s room not feeling well. To ease their daughter’s pain, they gave her a Tylenol extra strength capsule. Shortly thereafter she was found in the bathroom and later pronounced dead. Not long after this, Adam Janus of Arlington Heights, IL was found unconscious and rushed to a hospital where he died just a few hours later. While mourning the loss of their loved one, Janus’s brother, Stanley and sister-in-law, Theresa took a Tylenol capsule from the same bottle Adam had. They too would suffer the same fate as Adam, dying soon after. It was at this point that investigators became suspicious of the three family members death. Toxicology reports would confirm that there was indeed a connection between the four deaths, that being cyanide. McNeil Consumer Products, a daughter company of Johnson & Johnson who manufactured the Tylenol was immediately notified and a nationwide recall of the 31 million Tylenol bottles in circulation in addition to broadcasting warnings of the dangers of the Tylenol poisonings. In addition to the five bottles recovered from the victims’ homes, three more tampered bottles were recovered due to the media frenzy that ensued. Despite these efforts, Mary McFarland (Elmhurst, IL), Paula Prince (Chicago, IL), and Mary Reiner (Winfield, IL), would succumb to the cyanide laced Tylenol, leading to a total of seven victims.

Testing of the recovered Tylenol bottles found that the capsules had been laced with approximately 65mg of the highly toxic compound potassium cyanide, nearly 10,000 times the amount to kill an average person. An investigation carried out by the FBI and local Chicago police department found that the tampered bottles came from different factories. Tampering in the initial production of the Tylenol capsules was ruled out since all of the deaths occurred in the Chicago area.

The original theory behind the crimes was a culprit who took the Tylenol bottles from drug and grocery stores in the Chicago area over a period of weeks, opened the capsules and added potassium cyanide, after which the culprit would return the bottles to the stores to be purchased. Due to the capsule form of the Tylenol, one could not tell the pills had been tampered with. To this date, the crimes remain unsolved.

Recently, Scott Bartz wrote an expose titled The Tylenol Mafia: Marketing, Murder, and Johnson & Johnson which explores a very different story of the murders and why the case was never closed. Bartz, a former Johnson & Johnson employee, had another theory in which the tampered Tylenol capsules were introduced at the manufacturer warehouses rather than being tampered and replaced in stores. He goes on to state that Johnson & Johnson later learned about this information and intentionally hid the evidence.

The expose compiles numerous sources of information, including the interviews of the victim’s families, FBI, local law enforcement, and prime suspects as well as undisclosed documentation that give rise to why the murders were never solved. Some problems that Bartz encounters include lack of evidence to support a culprit tampering with bottles in stores, the closely guarded distribution system by the makers of Tylenol, and the manipulation of facts by investigators. The inconsistencies that occurred with the production & distribution of the Tylenol capsules are believed to be due to the relationships of the company executives and their political motivations.

In the years following the Tylenol murders, a number of copycat attacks occurred (ie. The 1986 Excedrin Tampering Murders). This led to tamper-resistant packaging and improved quality control of drug manufacturing through packaging reforms and the development of federal anti-tampering laws.

With new advances in forensic technology, the case is being re-investigated. A prime suspect at the time of the crimes was James W. Lewis, but police could not link him to the actual crimes.  In January 2009, Lewis’s home was searched for evidence and in 2010, he submitted DNA and fingerprints. The connection between Lewis and the murders is still being investigated.

On May 19, 2011, DNA samples were requested from Ted Kaczynski (The Unabomber) by the FBI. At the time of the crimes, Kaczynski’s parents lived in a Chicago suburb where he occasionally stayed. Kaczynski denies any connection to the murders.

Cops say Breanna's father, Miles Woodside, failed to return her to her mother as…