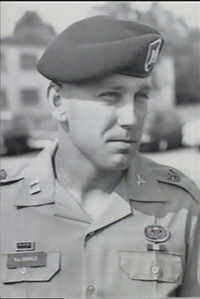 In Fort Bragg, North Carolina, investigators came to a home filled with of murdered individuals – Colette, Kimberly, and Kristen MacDonald. The suspect in this case was the lone survivor of the killings – Jeffrey MacDonald. With the evidence presented to the courts, and now available to the public, many insist on his innocence. Many individuals have come forward with statements regarding the murder suggesting his innocence while others assert that MacDonald is a cold, mass murderer who should not be granted an appeal or a new trial.

In the late night of February 1970, investigators were met with a bloody crime scene. There was an overturned coffee table in the living room while other furniture appeared undisturbed. Walking through the hallway and into the master bedroom, they saw a woman covered in blood lying atop a “white rug”. Kimberly and Kristen Macdonald were found in the rooms apparently belonging to the children.

Controversy arises from these brutal murders because of contradicting testimonies from witnesses, characters ranging from long-time drug abusers to retired US Marshals. And on top of these opposing statements, followers insisting on MacDonald’s innocence say that the prosecution suppressed evidence casting doubt on him being suspect.

One witness that came forward in the beginning was Helena Swoekley, who was being counseled by MacDonald for her long-time drug abuse. She spoke with investigators confessing to being part of the murders. She changed her statement when she was put on stand claiming she does not remember what she did the night of the murder.

Another topic of controversy was the fact that Jeffrey MacDonald survived the crime with one stab wound, described by the investigators as minimal damage that did not threaten his life. But in medical reports, doctors describe multiple stab wounds and abrasions to his body along with multiple contusions to his head.

Defense attorney Bernard Segel claimed that he was never given detailed information regarding wool fibers found in all of the victim’s hands. These materials were considered ‘foreign’ because it did not match any of the fibers found within the homes. Furthermore, the hair fibers found in Colette’s hands were of blonder color and supposedly from a wig. According to Swoekley’s statement, she said she was wearing a blonde wig at the time of the murders.

The prosecution does not believe MacDonald’s account of the night and claims that the physical evidence proves a staging occurred. Much blood, type O, (confirmed by blood type because DNA was not an advanced tool used in court as it is now) was found in all bedrooms where the victims were found. All the members of the family had different blood type, so finding blood type O in all bedrooms implicated Jeffrey MacDonald. The prosecution also entered into the trial interview tapes of MacDonald after the murders. His indifferent responses to the killings characterized him as cold, unremorseful, and guilty. In the CID (Criminal Investigation Department) reports on  the evidence, investigators claims that bloodstains of Colette MacDonald were found on Jeffrey MacDonald’s pajama shirt before the shirt was torn which only narrowed their focus on Jeffrey MacDonald as their prime suspect.

In the interview transcripts, MacDonald asked why he would murder his family when he was perfectly happy with his life. In response to his demanding inquiries, they reminded him of his extramarital affairs. Prosecutors found that this would be the primary reason to the heinous murders of the family.

Helena Swoekley claimed to have been witness to the murder of the MacDonald family. Retired US Marshall Jimmy Britt said in a sworn statement that he overheard Jim Blackburn threaten Swoekley to not share her statement on the stand or she would be indicted for murder. Swoekley’s mother, also named Helena, came forward sharing that her daughter confided in her two separate events that she was present during the MacDonald family murder. Swoekley claimed that she was present in his house that night to intimidate MacDonald because, as a counsel, he was being “too hard” on drug users.

Although much of the evidence is primarily circumstantial, the opposing opinions on whether Jeffrey MacDonald is innocent or guilty keep increasing.

Jeffrey MacDonald was granted an appeal after compelling witness statements made by Retired US Marshall Jimmy Britt (now deceased), human DNA found in fingernail scrapings from one of the victims not belonging to anyone from the MacDonald family, and foreign wool fibers.

Because Jim Britt and Helena Swoekley are both deceased, prosecutors see it “improper” to admit it as evidence for a new trial.

What is art forgery?  For the most part art forgery is the creating and or…

Many people get schizophrenia and personality disorder confused, especially since movies and television shows tend…

Is Bacteria the New Forensic Tool?

Is bacteria the new forensic tool? A new study out of Colorado shows that it…