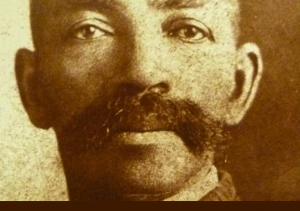 Bass Reeves was born in 1838 in Crawford County, Arkansas, a child of slaves. He grew up in Grayson, Texas after his owner, William S. Reeves relocated. During the Civil War, Bass claimed to have fought under the leadership of William Reeves’ son, Col. George Reeves in the Battles of Pea Ridge (1862), Chickamauga (1863), and Missionary Ridge (1863). Bass Reeves’ family however, claims an alternative story which suggests that between 1861 and 1862, Reeves attacked his owner in an argument over a card game and escaped into Indian Territory. Though the truth has yet to be determined, historians consider it unlikely that Reeves ever served in the last two battles. Regardless, after the war, it is understood that Reeves served as a guide for U.S. government officials as they passed through Indian Territory.

In 1875, Reeves began his career as a deputy U.S. Marshal under the guidance of Federal Judge Isaac Parker of the Western District of Arkansas. Roaming a 75,000 mile area in what is now mostly Oklahoma, Reeves was responsible for chasing and apprehending criminals. At 6’2″ Reeves learned from the Native Americans how to make himself appear smaller on his strong white and grey horse. At times he would surprise outlaws by adopting their clothing and mannerisms. Reeves apprehended more than 3,000 outlaws and killed 14 during his time as a marshal.

Law Enforcement is Not Above the Law

An indictment that was unsealed on Tuesday, July 13, 2010, has charged four members of…

Bin Laden’s Death Is Justice for All

Osama bin Laden, a name that strikes fear into American hearts and the hearts of…

What would you do if your pen ran out of ink? Get a new pen,…